Masonic Village at Lafayette Hill residents have been enjoying the free Echo Dots they received from Amazon.com through a device donation program that began in January 2021 in response to the COVID-19 pandemic.

The Amazon Echo Dot, more commonly known as an Alexa, is a hockey puck-shaped smart speaker and a more compact version of the original Amazon Echo. Residents simply can give voice commands to answer questions, get a weather report, find a local business, play music and hundreds of other tasks.

Director of Sales & Marketing Bridget Harris has been educating residents about how the device works and some frequently used commands. The device is also programmed to dial several phone numbers within Masonic Village, such as food services and the front desk. Reminders can be set and used for appointments and medication reminders, too.

“Residents stop me in the hall to tell me how much fun they are having with Alexa,” Bridget said. “It is a great way for people who don’t consider themselves tech-savvy to try something new. You can’t break it, there are no buttons to push – if you can talk, you can use an Echo Dot.”

Through K4Connect, the device can tie into Masonic Village’s activities calendar. Residents can keep track of events and activity schedules by asking Alexa to recite the day’s events. This provides one more way residents can stay connected within the community.

K4Connect integrates smart technologies into a single system for older adults and individuals living with disabilities. It consists of an app, which Masonic Village has named Village Connect, through which residents can view campus news and updates, dining menus, event calendars, a resident directory, games and photo/video sharing, as well as access to smart home technology features. After thorough testing and trials in Elizabethtown, the benefits were rolled out to Masonic Villages’ campuses in Dallas, Lafayette Hill and Sewickley beginning in 2017.

For many residents, the Echo Dot may be the only piece of technology they have. For others, it’s a good companion device to a cell phone, laptop or iPad.

“I love my little baby Alexa, and that is something, because I’m not a ‘techy’ person,” Masonic Village at Lafayette Hill resident Celine Childs said. “I’ve been using it as an alarm clock and to listen to music.”

Celine said she’s grateful to have received the device from Masonic Village. “I’m thrilled they supplied them. They are a nice gift to get.”

Resident Chris Reynolds said he listens to the Phillies game on the device until he falls asleep and then wakes up in the middle of the night to ask Alexa what the score is.

“I could never do that before,” he said. “I had to turn the TV on and listen to 20 minutes of commercials to find out who won. It’s very convenient. The other day I asked her to play music. On Memorial Day, I asked her to play marches, and she played them. I’m very happy with it.”

Getting Back to Life and Each Other 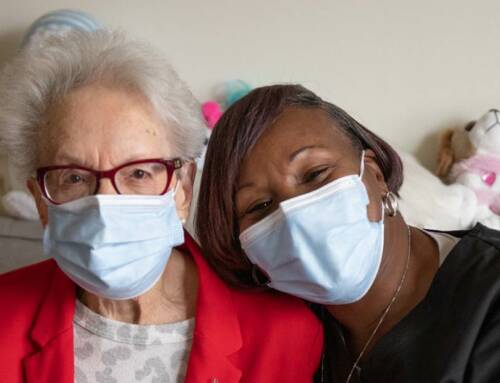 Want to Prevent Those Holiday Pounds? Avoid Pitfalls With These Tips